The Lure of Illusions

A tale of Intrigue and Tragedy in war-torn Syria 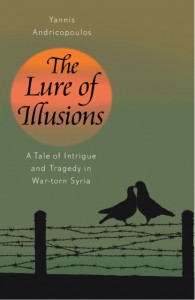 Ari Boletis, a young Arabic-speaking Greek from Alexandria, arrives in Damascus in September 2015 as the chief information officer of the United Nations Relief and Works Agency for Palestine Refugees. A month later he is joined by Laura Heineken, the new BBC reporter in the Syrian capital. The two of them are in love with each other since the very first day they met at Conway Hall, in London’s Red Lion Square.But their feelings had never been acknowledged.

Their life in this war-torn country turns out to be very challenging right from the beginning. Just passing through neighbourhoods which mortar fire, barrel bombs and airstrikes have turned into an eerie and desolate urban landscape is enough to let loose inside them the spirits of the night. And then it does not take long before a suicide bomber chased by members of the Mukhabarat security, convinced apparently that by doing so he would confer upon his soul eternal immortality, blows himself up in a street close to them.

Laura soon discovers that weapons worth millions of dollars shipped into Jordan by the Central Intelligence Agency and Saudi Arabia for the benefit of Syrian rebels, are being systematically stolen by Jordanian intelligence operatives. They are then being sold to arms merchants on the black market. Ari’s wave of excitement at her discovery does, however, disappear the moment he felt a sudden spasm of apprehension. ‘If they find out what you’re up to, they’ll chop your head off,’ he warns her.

Soon after they at last acknowledge their love for each other and the windows facing the darkness of the outside world, in which the horrors of the war are flapping interminably their wings, are instantly shut. The passion of the moment and the soothing promises of eternal happiness flows through their veins. It transfigures them. Lost in the timeless present, they are both on fire. 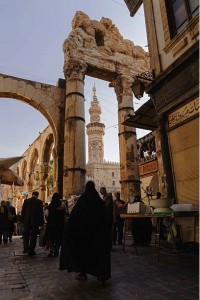 The anticipated attempt on Laura’s life is made when she met an arms dealer. The suicide bomber was a seven year old girl who had entered the building, asking for help as she was lost. Then there was a blast. The child had a small home-made bomb attached to her body, which was detonated by remote control. No one except the girl was killed. It was not the first time the jihadis had sent a child with a suicide belt.

Though fully aware of the dangers, Laura decides to carry on with, and conclude, her investigation into the arms dealers’ business. ‘Another couple of days and I’m finished,’ she tells Ari before he leaves for a short visit to Yarmouk, a town in which the dead outnumber the living. The area is controlled by Jabhat al-Nusra, the al-Qaeda affiliate in Syria, and also Isis. Hearing that people, mostly Palestinian refugeees, eat cats, dogs and donkeys in order to survive turns distress and fury into the inmates of his breast.

Utterly dispirited, he returns to his office but only to hear that Laura’s body has been found in Eastern Ghouta. A note pinned on her body read: ‘Allahu Akhbar’ (God is Great). He almost has an apoplectic seizure. A few days later, after he manages to absorb a bit of the shock at her loss and recover possession of himself, he sets as his task the discovery of her killers and the reason they killed her. He feels he owes it to her.

The guilty party could be jihadis, members of the insane, murderous Isis, or Bashar al-Assad’s security forces. But more likely, it was an arms dealer, the Jordanian intelligence, or one of the armed 1,000 opposition groups in Syria fighting brutally against both the regime and also each other.

In his investigation, Ari moves from neighbourhoods ruined by the war to the capital’s high life districts and from the regime’s security headquarters to rebel-held areas. But in the process he bumps into the barricades the battle for Syria had erected everywhere. On the one side there is Bashar al-Assad, a dictator determined to protect by all means the interests of his clique, and on the other numerous forces, both foreign and domestic, determined to advance their own interests whatever the cost to the Syrians themselves.

Most prominent among the latter are the rulers of Saudi Arabia, Qatar and Turkey, all of them hostile to the ‘Arab Spring’, eager to expand their own sphere of influence, and determined to end the rule of the country by Bashar al-Assad. To that effect, they had already made sure that the peaceful protests against his dictatorship had turned into an armed insurrection, fully controlled now by Salafists, Jabhat al-Nusra and the Muslim Brotherhood. These groups are fully backed up with funds, arms and ammunition by Western Powers, those who, despite their stilted euphemisms, were determined to see the end of the Bashar al-Assad regime only in order to force the Russians out of Syria. The dismal picture is further beclouded by the blunders the latter committed endlessly in their effort to fulfil their ineptitude’s potential.

Moving through a maze of divisions and in the face of ferocious atrocities, occasionally captured in painful granularity by the media, Ari manages eventually to identify Laura’s killers. But, as he discoveres, subsumed into the callousness of a reality shaped by self-interest and force, justice is a rather elusive concept.

The story is fictional, yet it develops against a political background that reflects the impetuous pursuit of self-interest in a world that no longer sees madness as an abnormality but as a lubricant. Politics is at the mercy of its protagonists’ illusions, each one of them convinced that the future is their property.

‘The Lure of Illusions’ is available to purchase from Amazon, Blackwells, Book Butler, Waterstones, Foyles, Wordery or by calling the Skyros office on 01983 865 566.